After our week of travelling in May, it was just Zach and me again. My friend Capt’n was still around travelling though, on his JR Pass throughout the month.  Zach and I still had our own mini adventures. We ate at our first taco bell and it felt like a real meal instead of late night snack food. You can choose three types of meats, your spice level in any of their food shapes, and you get a side of chips or french fries. We recommend! We also went to a couple of festivals and discovered other snacks.

Part of the Taco Bell Menu

Getting lost in Meiji Jingu 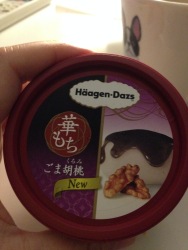 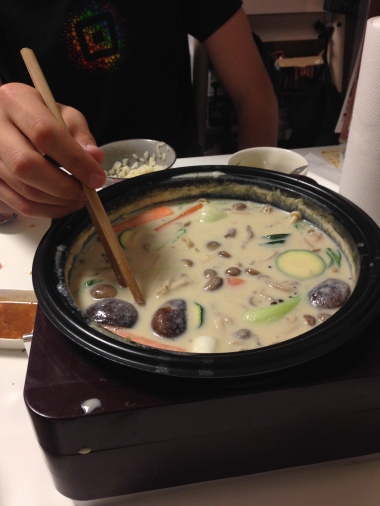 We eat burgers here too.

We decided “Hey! Let’s visit our favorite son!”. He was staying in Sapporo, Hokkaido, which is the far northern island of the country. While there is a Shinkansen that goes up to that island, going to Sapporo, which is on the other side of the island, would have been trickier by train. We ended up going by plane, which was not too bad. It was basically like a trip from SF to LA. Security was super easy to go through. The people didn’t have a grumpy attitude and no shoes needed to be taken off.

Once we got to Sapporo, immediately we noticed the weather change. It was a lot more chilly, like SF Bay Area chilly. I kind of liked it. The train towards downtown was cozy, with it’s big one door that swung and hermetically sealed you into the car. We met Capt’n and dropped stuff off at his big air bnb. We then headed to lunch, curry soup, which is a local specialty. It’s basically like a thinner Japanese curry in stew form and it has seasonal vegetables grown in Hokkaido. You could have the option of having coconut milk in the curry like the boys did. Mine had a big chicken leg which I liked a lot! I think curry soup would work well in San Francisco since they both have similar weather (like “God trying to spit out a hair”, as Capt’n puts it).

How did he turn into a dog??

After lunch, we walked around downtown Sapporo, checking out the bookstores and trying to avoid the half sprinkly, half rainy weather. After Capt’n brought us to this big festival at Sapporo University. It was a student run festival with each booth serving all kinds of foods. It was really impressive how many booths there were and how enthusiastic the kids were. We ate two kinds of bbq chicken, and a fruity dessert item from another booth too. We also got some yakisoba for Capt’n since he hadn’t tried it before. He started eating it and I kept asking “So how is it? Capt’n?” but he didn’t respond. He basically vacuumed the yakisoba. I also got the other local specialty, buta don (pork donburi), which was quite tasty! 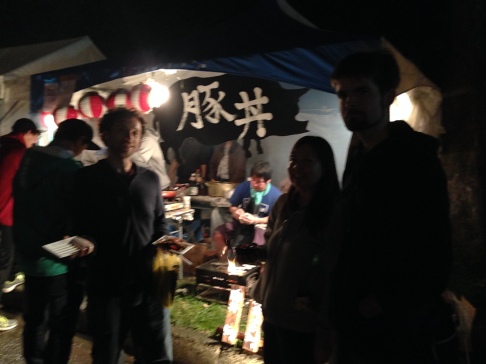 One of the students took our picture at Sapporo University Festival

The next day we went to a coastal town, Otaru, which is famous for having canals run through the city. Except we didn’t actually walk up and see the canals! We had some local sashimi bowls, which was pretty good. Half an hour away we headed toward one of Japan’s well known whisky distilleries, Nikka Whisky. The boys drank their fill of whisky samples and I was designated sober navigator. The apple juice was really good. We ended the night with another local specialty, genghis khan, which is lamb and vegetables cooked on what looks like a helmet shaped grill. So good! So carnal! We flew back the next day. Hokkaido is a cozy place that reminds me sort of like home. It would probably be a different story during the winter time, when it is full out snowing. I definitely wouldn’t mind exploring the island more and I feel like there’s a lot more hidden gems to see.

Capt’n was in the country some more, and he ended up coming back to Tokyo a week or two after our trip. We went around seeing the special neighborhood areas: cat lady town Yanaka Ginza, full of book nerds and coffee in Jimbocho, and walking around Waseda University. We also watched Logan with friends Maytee and JT, which was kind of depressing but still good. While it was fun to have Capt’n around and drink $6 coffees with, it starting feeling a lot like his trip had run it’s course and he had seen everything he needed to see. He left one or two weeks later. Sometimes you just have to let your baby birds go! 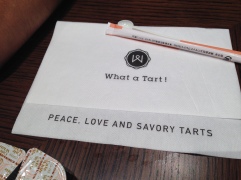 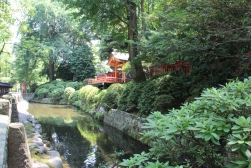 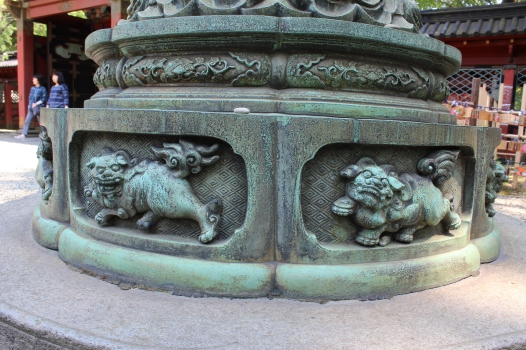 Zach as a pokemon! 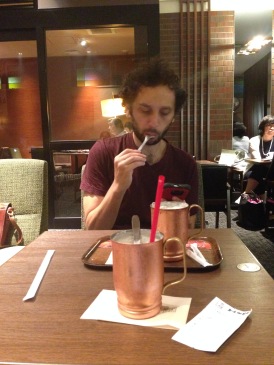 As Libby mentioned, we had a small break from guests after Elise and Captain left.  We made some small afternoon adventures, and as Tangs do, ate a lot of food lol.

Eventually we found good opportunity to catch up with Captain as he had been traveling around the country on his own, and so we headed to Sapporo.  I really, really wanted to use the train to reach Sapporo, but as this was a weekend trip, time was a crucially of the essence.  In most cases, taking a Shinkansen across the heart of the main island is comparable to plane in terms of time, the train to Sapporo is much slower than the plan, due to the several mountains that it must travel around, rather than take a direct route.

As Libby mentioned though, airplane travel in Japan isn’t so bad.  Airports are less crowded, security is far less awful, and service is much nicer.  The Sapporo airport kind of reminded me of a Gym, though, because of these colorful lanes drawn along the floor leading through the concourse.  It made me think I was  I wish I had gotten a picture of them.

Sapporo’s weather felt a lot more like home for sure.  But being some who doesn’t do so well in cold weather — I didn’t like it :(.  It was wet.  Cold.  Overcast.  Meh.  The city itself reminded me of Anchorage when I visited Alaska a few years back.  Large parts of the city are still underdeveloped and open, with concentrated centers of activity.  In any direction you looked, you could see about the horizon the vast wilderness, oceans, and mountains that surrounded it, unlike the sprawling suburbs of most cities you’d see. 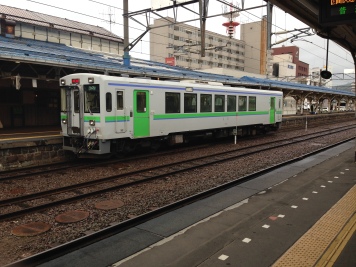 Parakeets at one of the big main Sapporo Stations! 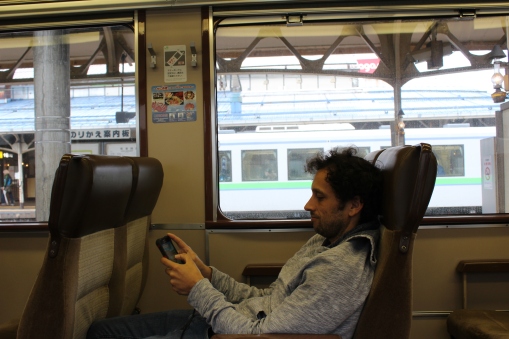 The Yakisoba story was great — basically, Libby asked Captain if he wanted some, and introduced him into buying it… obviously with the intent to share it with her.  But before she had even noticed, it was all gone.  This is kind of insulting to a Tang — someone out eating you, especially when you underestimate them!  We had a good laugh over the episode.  The festival had a lot of good smelling food from a lot of ethnicities, too.  I got the feeling that the although it was university sponsored, the community at large participated as it was such an important event for the city.

Otaru was a really nice town.  It felt like an old port city, kind of lost in it’s own time.  Fish, glass, and whiskey seemed to the the big things going on in this town.  Although there was also a fairly interesting looking karaoke bar apparently built into an old courthouse building, which looked pretty fun!

The Nikka Whiskey area was pretty nice.  I liked the story of the Japanese dude who had built the distillery and company: he had trained in alcohol distillery in school, got married to a Scottish lady, and lived out his life in cottage surrounded by his distillery.  Not bad.  The whole place had a great smell, too, that reminded me of delicious pickles.  The whiskeys tasting itself was enjoyable, too, although Libby was more keen on the juices they provide.  Interestingly, Nikka initially sold fruit juices exclusively for the first decade while their early batches of whiskey waited in barrels. 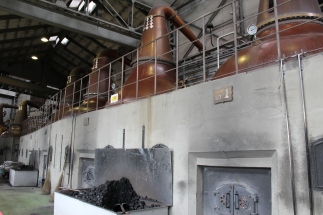 Coal is still in! 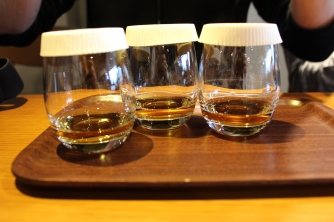 The best potato snack ever!

Til next time, Sapporo

Anyways, yeah, it was a quick trip, but it was nice to have something self contained after our much broad adventures throughout May.  Besides, summer was approaching, and we all remember what summer in Japan is like:  festivals!  More to come next time! 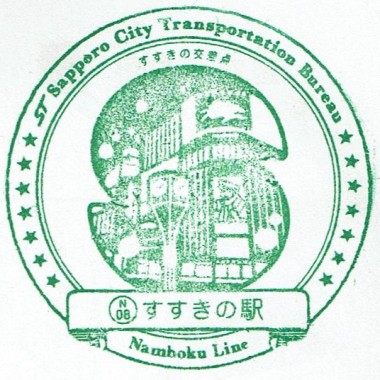 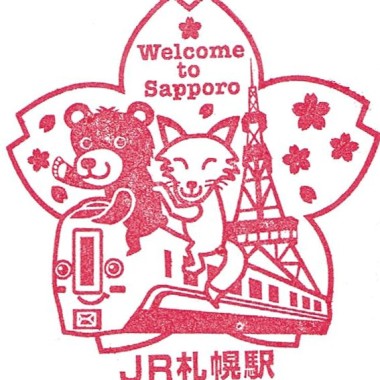